Darius the Mede: A Reappraisal, Steven Anderson: A Review

Home/Apologetics, Bible Doctrine/Darius the Mede: A Reappraisal, Steven Anderson: A Review
Previous Next

Darius the Mede: A Reappraisal, Steven Anderson: A Review

More Resources Presenting Evidence that the Bible is God’s Word

Download for free Darius the Mede: A Reappraisal here, as well as Dr. Anderson’s doctoral dissertation

Purchase Darius the Mede: A Reappraisal on Amazon.com

Darius the Mede: A Reappraisal, by Steven Anderson: A Review 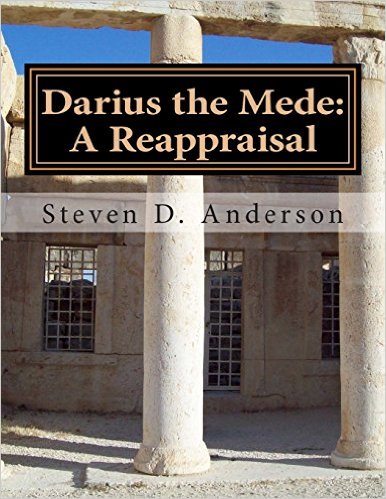 The book Darius the Mede:  A Reappraisal, by Steven D. Anderson (North Charleston, SC:  CreateSpace, 2014), defends the view that Darius the Mede was a historical king of the Median empire.  He maintains that, in accordance with the account in the book of Daniel, this Median king overthrew the Babylonian empire.  Dr. Anderson explains the purpose and need for his work as follows:

The purpose of this study is to establish the identity of Darius the Mede in extrabiblical literature, and to give an explanation for contradictory accounts regarding the accession of Cyrus and the existence of a Median king at the time of Babylon’s fall. This study will examine the parallels and discrepancies between Daniel’s presentation of Darius the Mede and the 1 For a chart of Persian and Median royal lineages reconstructed according to the conclusions of this study, see the appendix. 2 For a more detailed overview of the historical scenario argued for in this study, one may read the first main section of chapter 5. 2 presentation of the history of the transition between the Babylonian and Medo-Persian Empires in relevant extrabiblical historical sources. The goal of such a study is to determine with greater clarity the nature and identity of Daniel’s Darius the Mede, and to give an explanation for the discrepancies among the historical sources. An additional, related aim of this study is to lay the groundwork for interpreting future archeological discoveries, as new texts which bear on the issue of Darius the Mede come to light. The questions asked and answered in this study are primarily historical questions. However, since the book of Daniel has become a focus of critical attacks on the divine origin of the Bible, issues of apologetics lie in the background. Although faith is the ultimate proof of the Bible (Heb 11:1), the Scriptures themselves contain arguments which are intended to convince skeptics of the Bible’s authenticity (Isaiah 40–66 is a prominent example). Thus, it is hoped that this study will be an encouragement to believers and unsettling to skeptics by demonstrating the reasonableness of biblical faith, on the one hand, and the folly of mistrusting the Bible, on the other. . . . The view that Darius the Mede is the man identified by Xenophon as Cyaxares II was the dominant view among Christian and Jewish commentators on the book of Daniel from the first century AD through the middle of the nineteenth century, but was virtually abandoned after Akkadian inscriptions that supported Herodotus were published around 1880. There is more extrabiblical evidence in support of this view than the attention currently given to it would suggest, and problems with the prevailing views of Darius the Mede demand that scholarship take a fresh look at the identification of Cyaxares II with Darius the Mede. The present study is the first book-length work to interpret the Akkadian inscriptions within a historical framework that recognizes the existence of Darius the Mede as a real king of Medo-Persia who preceded Cyrus.

Dr. Anderson (Ph. D., Dallas Theological Seminary) has composed a work well worth reading that provides a credible defense of the historical accuracy of Daniel.  An alternative identification of Darius the Mede, which is currently more popular than Dr. Anderson’s position is proposed on pgs. 49-50 of The Book of Daniel:  Proof that the Bible is the Word of God on this website, as well as in many other works by Bible-believing scholars.  There are multiple views on identity of Darius the Mede:  Dr. Anderson identifies him with Cyaxares II, while others identify him with Gubaru and others with Cyrus himself.  Dr. Anderson’s book is a revision of his doctoral dissertation on this topic at Dallas Theological Seminary.  One can download the book for free as a PDF file here, or download the PDF file as well as Dr. Anderson’s dissertation on his website here.  You can also purchase his book at Amazon.com here.  Dr. Anderson summarizes his case, and discusses how his work has been received in the scholarly world, in a blog post here entitled “Darius the Mede:  A Solution to His Identity.”

Dr. Steven Anderson has made a commendable contribution to scholarship with his work on Darius the Mede.  Both theological conservatives who take alternative positions and theological liberals and skeptics that deny the historical accuracy of the account in Daniel should take Darius the Mede:  A Reappraisal into account.

More Resources Presenting Evidence that the Bible is God’s Word